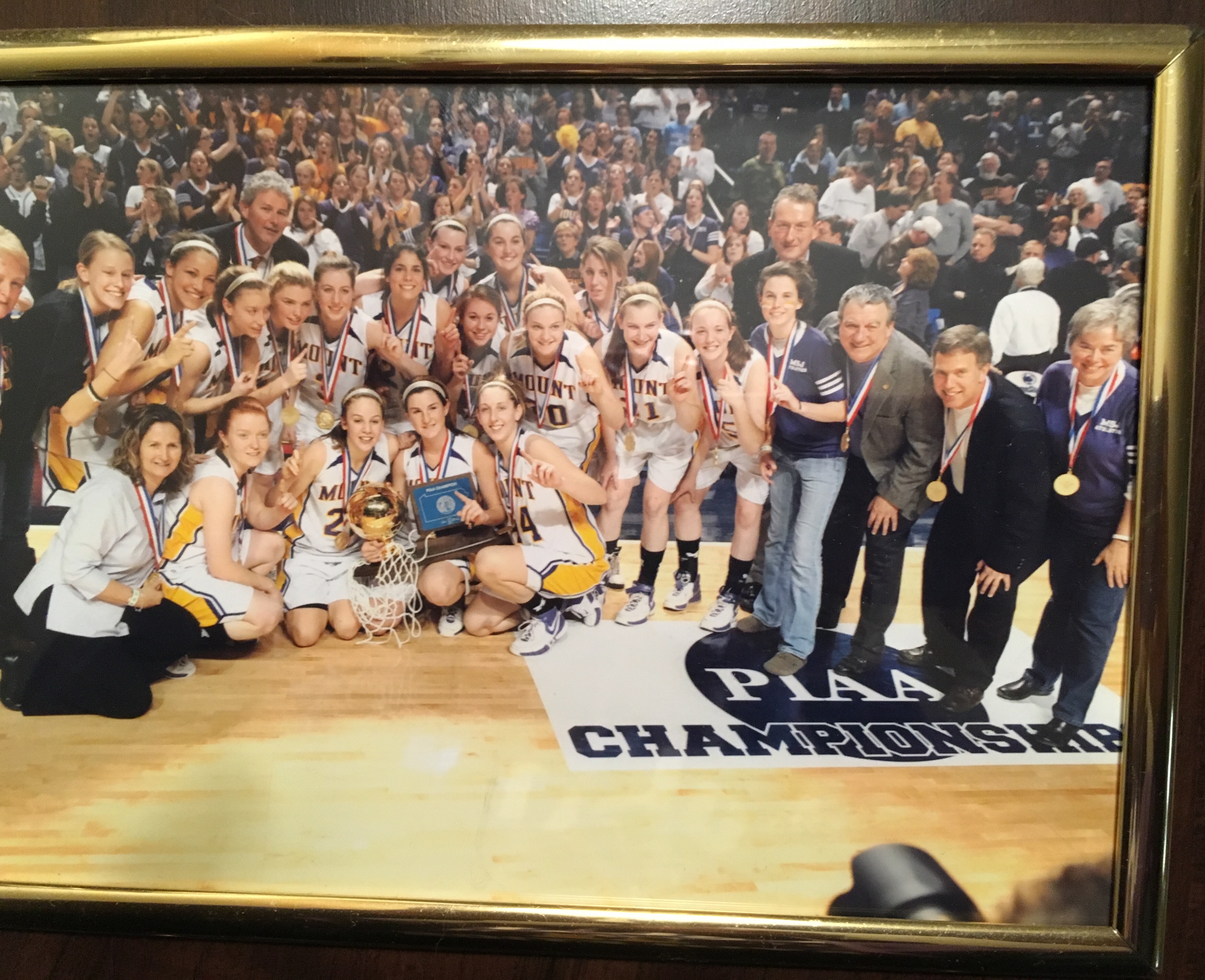 Kate is a member of the Mount's 1,000 Point Club. She started all four years on Mount's varsity basketball team and spent two seasons as a forward on the field hockey team. After graduating from the Mount, she played basketball at Georgetown University, where she had a successful four-year career and set the Hoyas' all-time record for most three-pointers scored in one game.

Lois was the first Mountie to be inducted into both the Alumnae Hall of Fame and the Athletic Hall of Fame. Her experience with rowing at the Mount led her to participate in the 1973 National U.S. Women's Team that competed in the World Championships in Moscow. Lois also petitioned the Dad Vail Regatta to add women's events. In 1974, women raced for the first time in the Dad Vail. In addition to her own athletic career, Trench-Hines plays a huge role in Mount Athletics today, specifically with the crew team.

As a student at the Mount, Joanne played field hockey and basketball for 4 years and captained the basketball team in her senior year. Joanne was also honored with a gold medal for Athletic Achievement in 1949. Following graduation from the Mount, Joanne continued her athletic pursuits while playing field hockey and basketball at Chestnut Hill College and served as an Athletic Association Representative. During this time she also found time to coach CYO basketball at Our Mother of Consolation and Our Lady of Lourdes from 1954-1960. Joanne returned to the Mount to coach Field Hockey, Basketball and Tennis. She also served as a faculty member teaching Health and Physical education. As a new coach she led the 1954 field hockey team to an undefeated season and Basketball team to many league championships. After leaving the Mount, Joanne continued her loving of teaching at our lady of Mt. Carmel from 1970-87 teaching 4th grade math.

For the past 30 years sports have played an important part of Kathy’s life. As a Mountie Kathy played both field hockey and basketball all 4 years and was elected captain in both sports her senior year. She was named by the Evening and Sunday Bulletin as the outstanding Scholar-athlete from Mount Saint Joseph Academy in 1970. After graduation Kathy played for St. Joseph’s College now St. Joes University’s first women basketball team and competed against the legendary Mighty Macs. Kathy was also a member of the first women’s class to graduate from St. Joe’s. Kathy returned to the Mount to coach basketball from 1980-1983 and compiled a record of 16-11. Her love for basketball and field hockey lead her to the career of being an official 1983. She currently officiates basketball and field hockey on the college level and field hockey and lacrosse at the high school level. Kathy mentors new officials and has served as chair of the Phila FH umpires board and vice president of the Bux-Mont basketball chapter. The Phila board of officials for Women’s sports has honored Kathy for her 25 years of outstanding service.

Kim Koschineg Stefan, class of 1994, a 4-year student council member while at the Mount Kim was also a 4-year varsity basketball starter and the first Mountie to score 1,000 points as a junior, a record she still holds. Among Kim’s other basketball accomplishments while at the Mount included: Being the leagues leading scorer in her sophomore, junior and senior years. Being selected by the coaches of the league as an all star for all 4 years. And being named to the Montgomery County’s Top 10 Player of the Year in both her junior and senior year Kim continued her basketball career at Drexel where a knee injury sidelined her for her freshmen year but with persistence and determination Kim became the leading scorer as a sophomore, was 7th in the nation for leading 3 pt field goal percentages and was listed as a top 10 in the Colonial Athletic conference for field goal percentages. As a junior Kim transferred to the University of the Sciences to finish her bachelors degree in health science and to continued her athletic achievements on the court .As a college junior Kim scored her collegiate 1, 000 points, was selected small college player of the year, and made 1st team all-American, as a senior she accomplished more accolades when she became a 2,000 point scorer, the leading scorer in school history and 2nd team all American. After finishing her bachelor’s degree Kim remained at University of the Sciences and received her master’s degree in occupational therapy. She currently owns and directs the first and only treatment center in Bucks County dedicated to the care of patients suffering from lymph edema.

In 1976, Mary Ellen Carroll Brown became head basketball coach and led the team to the League Championship Title in 1978. As a student at the Mount, Mary Ellen played varsity basketball, and in senior year, was captain. She became a voice in the Athletic Association as a representative, a board member, and was voted president senior year. Mary Ellen accepted an athletic scholarship to Chestnut Hill College, where she played basketball for four years and was captain senior year. In 1953, she earned her first League Championship title as coach of Little Flower. Mary Ellen taught Social Studies in Philadelphia, and helped develop a core syllabus for the Philadelphia Junior High Social Studies curriculum. She served on the Mount’s Alumnae Board. She and a team of planners created the CCD program for the Archdiocese of Philadelphia. Mary Ellen is a member of the Respect Life Movement and Adult Faith Formation. (Bio by Megan Kummer ‘09)

Best put by her four daughters in their nomination letter, “…she epitomizes the spirit of Spes Mesis in Semine by planting the enjoyment of sports, and nurturing the efforts of young athletes.” Renowned women’s basketball coach of Villanova University and Chestnut Hill College, Mrs. Joan Burger King, ’63, was a proud member of both the varsity basketball and the varsity field hockey team. She played an undefeated season of basketball her junior year as a top scorer, and then an undefeated season senior year of field hockey. At Chestnut Hill College, she coached women’s basketball and volleyball. Then, at Villanova University, Joan led the Wild Kittens to their best season in the school’s history at that time in 1977, including their first championship win. As a player, coach, and mother, Joan pushed for physical excellence while promoting independence, confidence, perseverance, humility, and sacrifice. (Bio by Amanda Stillwell ‘10)

Mount’s youngest inductee this year to the prestigious Athletic Hall of Fame, Megan E. O’Neill, ’88, was a hit in the game of softball. Pitching two no-hitters in high school, she was named an "Atlantic Ten Athlete of the Week" in college, and eventually played on a semi-pro team. As a two- year captain of the softball team, Megan set the school record by striking out an outstanding 131 batters in 72 innings and led the girls to a perfect season. She continued her softball career on the collegiate level with a partial scholarship at the University of Rhode Island, and after that as part of a Semi-Pro team. In her post-academic days, Megan is passing on her dedication, principles, and love for the game by serving as both teacher and coach at the Wilson School in inner-city Phoenix, and has done so for fifteen years now. (By Lauren Duda ‘10)

S. Anne Reilly Mattson, a five-sport athlete, dominated her competition playing basketball, field hockey, tennis, racquetball, and squash. She founded and was first president of the Catholic Academies League and was once considered the best squash player in the world. Anne began her sports career at the Mount in 1940 and excelled playing basketball, field hockey, and tennis. At Chestnut Hill College, she was captain of all her teams from 1944-1948. While pursuing a master’s degree, Anne coached field hockey at Melrose, Raven Hill and Merion Mercy, leading Melrose to win the Catholic Academy League. Anne competed against national teams across the country while playing field hockey for the Germantown Cricket Club, Middle States Team, and the renowned Philadelphia Club and Second team. She played tennis for the Germantown Cricket Club, competing in the Junior Wightman Cup on the historic courts of Forrest Hills, NY, home of previous U.S. Opens. Her most prestigious championship came in squash, when she defeated the British team to earn the title, US. Doubles Championship. In 1983, Anne responded to God's calling and entered the order of the Grey Nuns. This past May, she celebrated her 25th Jubilee. (By Christina Gallagher’10)

Captain of the basketball team that claimed the Catholic Academy League Championship title, captain of the field hockey team, volleyball player, and recipient of nine varsity letters, Patti Dugan Donoghue ’78 was the recipient of the Philadelphia Inquirer and Evening Bulletin Scholar Athlete Award and member of the Philadelphia All-Star Basketball Team She was also recognized by Who’s Who Among American High School Students and the Society of Distinguished American High School Students. Patti played basketball in college, transferring to LaSalle University where she received a scholarship for basketball and track from 1979 to 1982. Patti was named a Scholar Athlete in 1982, and was a Rhodes Scholar nominee and Fulbright Scholar nominee. She is a member of the National Charity League, a mother-daughter philanthropic organization serving local community organizations, and is a Eucharistic minister and Youth Group Leader in her parish in Arizona. (By Catherine Zakrzewski ‘11)